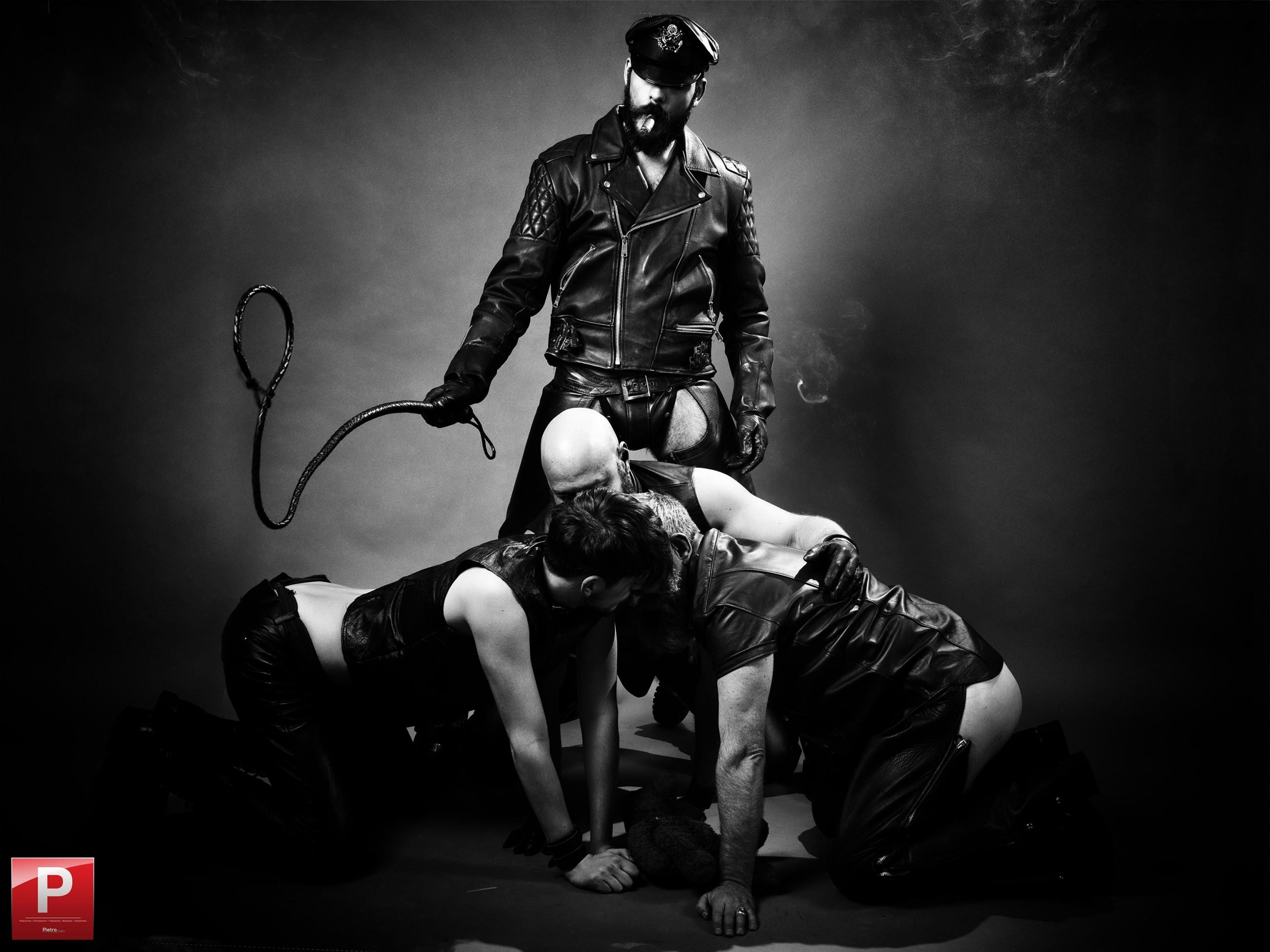 “You look hot in your leathers” they say. “Woof Sir, wonderful leather jeans”. “Wow, love you in your boots”.

Let’s say that inside of the “community” the WHY behind the WHAT, regarding wearing leather, is not something of which is felt the need of clarity; not that much. And this is a big problem. But here today I want to talk to the other fellows; the ones outside the community, wondering why on earth should I dress this way, and why. Most of the people outside the community find Leather hot and sexy, even when they are talking bad about it to their peers (because of course god forbid that someone around them think that “they might like it”).

I think, thought, that an explanation is needed both for the people gravitating towards the community and also for those ones already inside of it. As I stated before, there is no sense in doing the WHAT if there is no WHY. I can tell you why Old Guard Leathermen wear leather, and I am pretty sure you can ask anybody in New Guard “why do you wear leather?” and they won’t have a clue why. Most of them, they’ll admit to you they’re actually uncomfortable. 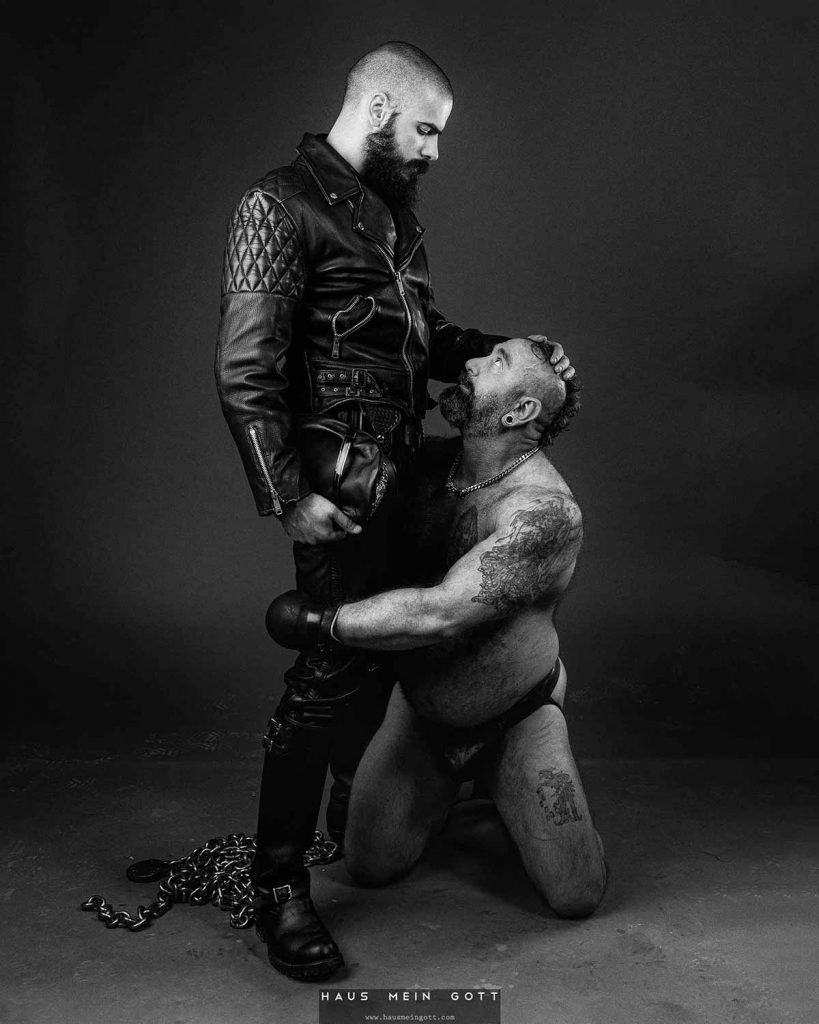 The Leather BDSM community found its fortune and development in the US and central Europe right after War World II. BDSM and the roots of Leather Culture are deeper than that, but let’s say that in CONTEMPORARY CULTURE the explosion (and the beginning of social acceptance) of BDSM happened in that time. After World War II, life slowly started again to breathe and spread, and there was much more space for opening new clubs, bringing up new ideas and ideals, and meeting different cultures. Motorcycles were very common and profusely used back in the day, and especially US military officials still staying in Europe* were seen going around the towns and the harbors in their uniforms and boots. The culture of the motorcycle is a big part of what defined the Leather Culture. Plus, many motorcycle clubs opened and many of them were gay motorcycle clubs.  From “The Satyr” in Los Angeles to the “New York Motorbike Club”, the “Warlocks” and the “California Motor Club” in San Francisco; loving to ride a motorcycle, the sense of extreme freedom it gives, paired with the extreme freedom of the end of the war and being able to work a sense of community around each ones sexuality, was a great thing. So you can imagine how quickly it started to spread, wearing leathers, among gay people of a certain community. Wearing leather became a political statement. It meant identifying yourself as part of bigger community, a community led by freedom, an independent and original (your own) sexuality, the need to create a sense of FAMILY and PACK and live accordingly to a chosen and embraced set of rules. This thrown leather into pop culture, from where Marlon Brando and James Dean where seen by millions of people riding motorcycles, wearing Muir caps and dressing in tight leather and boots. And here you have it: the globalization of a “look”, which means a lot, but nowadays almost nobody realizes what it means.

*The US military was a strong presence, but the cultural stereotype from where today’s leather worship come from is also about German (yes, Nazis too) military, UK military, Holland military…

So yes, it tears my heart into pieces when I got to party and I see guys who are not leatherfolk wearing a harness, a leather jock strap, or chaps and sneakers and a Muir cap. Literally today each and every homosexual person around have seen a harness onto somebody and / or owns one. Leather shops are not helping in this sense, selling of course all kinds of new “gear” with pipings and random colors* that have no reason to exist or meaning whatsoever. Though they “look pretty”. It is an insult to the strong and brave heart of the community that led us here, and it has to be understood that the globalization and the turning into “fashion” of everything, has consequences. I used to find it difficult and embarassing when non leatherfolk people dressed in leather approached me and on my polite refusal of intercourse they said “we are part of the same tribe, what’s wrong with me”. No, we are not the same people. And I’m saying this not because I think I’m better than people around me. I’m saying this because where is lack of WHY, I’m not interested in the WHAT, as I know for a fact that we are not looking for the same kind of experience.

*About colors: did you know why leathermen (but not only them) wear colored items such as hankies or wristbands? And did you know that they have a precise meaning, and also wearing them on the left or on the right has a meaning? Long story short: left top, right bottom. And here is a list of which color indicates which “activity” or, if you wish, interest. 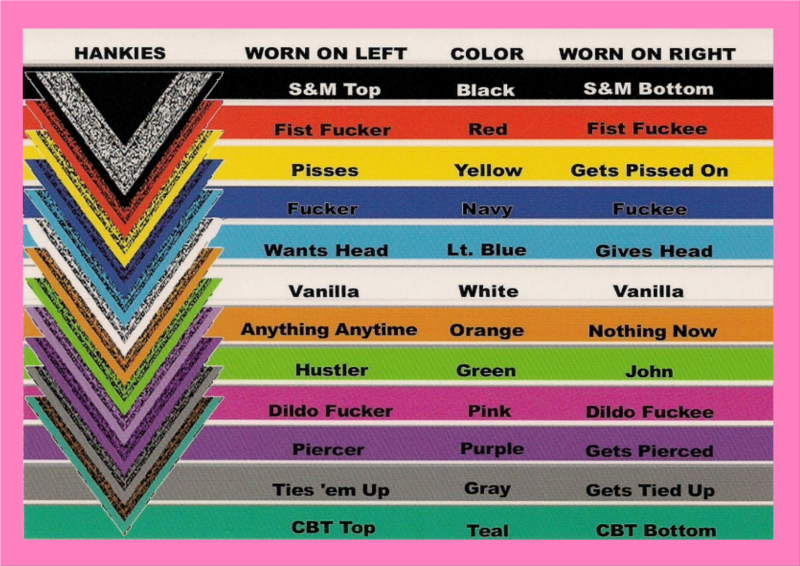 The importance of Hankie Coding, Keychain coding and more

Leathermen didn’t have an easy life out of their Leather Clubs and had to find ways to protect themselves. They have created specific codes to recognize each other and communicate efficiently their identity to the right people in their surroundings.  At the time it was perfectly plausible and normal to have a hankie with you, especially from the most rural areas but not only that; So every color of the hankies had a meaning for a specific activity or tendency, and wether it was sported on the right or left it meant which side of the equation one would occupy; also, there were different meaning on how much tucked in or out the hankie was.

The same goes for Motorcycle keys and the keychain. Right or left had the same meaning as above, while keys on the back, on the side or on the front meant wether the person was actually cruising, if they had a place to stay or if they were looking for a place to stay; Wether the key was tucked in or out of the pocket also meant if they were looking at the moment or not. A more detailed and precise description of these traditions will be written in a dedicated article on this website.

Why do you wear Leather?

There is surely a tiny bit of fetish in it, it is a political statement but most of all, it’s about tradition and meaning. It is wearing a uniform. It is honoring the roots of the big family I live in. When you’re wearing your leather you should feel pride, feel power, feel commitment and feel like you’re not alone. Without the structure of a real Leather community, I believe 90% of people wearing leather simply feel judged and more lonely. Instead they should feel like part of something bigger; In my case, I know I’m part of it because this is my nature, and there’s nothing better than finding your people.

I guess that many people have other reasons to have a kink about leather. From the boots and law enforcement apparel and all it can mean to many of us, the idea of Domination it conveys, and of course Uniforms for Old Guard people.
I understand the passion for leather gloves, which again brings up to other symbolisms and ancient meanings. In other words, wearing leather recalls to people the world of bikers and the world of the Army. Both very sexual topics to us men. These topics do convey, because of pop culture, the idea of forced Domination and other erotic landscapes our society is drenched in.

To me? As being an Old Guard Leatherman, to me it’s about Tradition, Honor and belonging. To me it is an honor to wear my leather.

Only one per month.

You have Successfully Subscribed!

Follows
Are you 21 or older? This website requires you to be 21 years of age or older. Please verify your age to view the content, or click "Exit" to leave.