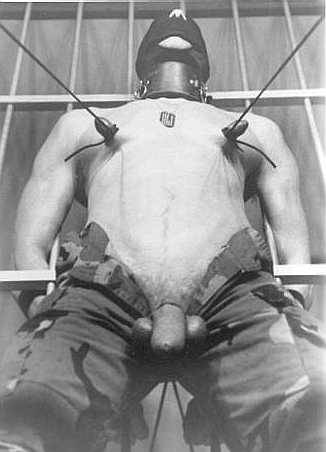 It had been a good day. HE thought as HE sat back and watched the fire burn down from the warm leather of HIS favourite chair wrapped around HIS naked back and HIS favourite Scotch in HIS hand warming HIS belly. At HIS feet curled around HIS right boot with its head under the left was the well used body of HIS property.
Slowly HE pressed the left boot down into its face and started to twist to watch the beard wrap around the sole of the now well cleaned boot as bits of wax crumbled from the eyebrows and moustache. The slave who appeared still asleep moaned and pressed up to increase the pressure of the boot and started to lick all without opening its eyes. The lack of any stress lines in its face and the deep breathing showed HIM that it was still deep in subspace and in a very happy place. While the left boot made more of a mark on the sub’s face, HE slowly drew back the toe of HIS right boot from its belly and started to slowly kick into it with short soft taps moving up and down knocking off more bits of wax. Slowly HE moved HIS heavy booted foot down to the mound of wax that was all that could be seen of the property’s cock and balls. With more force but still no hurry HE alternately kicked and ground all the wax off what was HIS to use. Occasionally stopping to press hard and hold as HE took another sip of the scotch. The obvious signs of pleasure from the sub was its dicklette starting to drip.
Through all this HIS property continued to grind its face into the left boot and to open its legs wider for better access to what was no longer its body and as a sign of submission and respect to its OWNER and TRAINER. Soft moans and the occasional deep breath as a boot found a tender spot, the soft rattle of the weighted clamps still on the swollen and pumped nipples, and the popping of the fire were the only sounds.
He lifted the right boot from between the legs of HIS property where it was slowly reopening the well stretched pussy lips and HE saw that more than half the toe was shiny with juice and lube and almost ready for more play, but, with a sigh and a grin, HE stopped and thought “Not tonight, greedy boy”. Instead HE used the heel to dig into the side and back of the sub to roll it over onto its belly and made sure to press the nipples deep onto the hard floor which made the sub moan and lick the left boot even more. The pool of drool under the boot had grown and HE moved the left boot to use the long beard as a rag to soak it up and then reached down and pushed the wet and dirty beard into the open mouth for more cleaning before HE replaced the boot against the sub’s cheek.
Before sitting back HE ran HIS hand over the now exposed back with the welts and marks of the session showing and turning darker as they became more apparent on the light pale skin of HIS property. HE lightly teased each raised mark and pressed down into the darker bruises feeling first the tension in the muscle as the sub tensed for more and then the submission as the indidivual muscles also submitted to HIS gentle but undeniable control. A few times HE tapped the contact points from the Dragon tail whip that had turned its back into a cross hatched work of art and left the sub begging for more.
Yes, it had been a very good night. And He decided on one final gift for the sub as a reward. Slowly and softly HE caressed the entire back with one hand, feeling and enjoying HIS handiwork while with the other HE put HIS Scotch down and reached for the fireplace tools. HE selected the tongs and drew a largish glowing ember from the coals. Being sure HE had it firmly in hand, HE began to trace the out

lines of the larger impacts from the flogger where the session had started. Not close enough to the skin to burn, the ember radiated warmth and heat and genereated the anticipation that HE wanted. Occasionaly a spark would drop from the ember and a moan or deeper breath would come from the canvas of HIS art at HIS feet. Then blowing on the coal to warm it HE moved in closer and began to burn the hair from under the arms and across the shoulders and even the little tufts at the base of the spine where the flogging and whipping had not already removed them. In some places the heat was enough to remelt left over wax and it ran into new puddles causing more moans and twitches. HE even lightly touched the tiniest part of each earlobe with the now much cooler ember to leave HIS own version of earrings for HIS property.
But finally, as HE grew tired and more relaxed, and HE knew the coal was just the right temperature, HE sat back and studied the pattern at the base of the sub’s neck. HE was pleased with the result that showed both HIS skill with the new whip and with the final pattern that would mark this property as HIS for a very long time. HE had used HIS tools to create a crown of marks the came up over the back between the shoulder blades to end just at the top of the shoulder. Not too small and not very large either. And in the middle there was a space for jewel… The crown Jewel HE thought and laughed as HE lowered the ember. HIS first words in a long time were “Burn for me, boy! You are MINE”. HE allowed the sub one deep breath in and out, waiting for the stillness to come. Then HE waited just a little longer to build the moment and catch it just a little off guard before HE set the ember down into the spot HE had left for it. Left it just long enough to capture the sight forever in HIS mind of the fire and scars and the beauty before lifting it quickly and tossing back into the fireplace.
HE reached down and lifted the sub to its feet. As HE held the deeply panting sub in HIS arms and stroked its head and shoulders until the peak emotions had passed, HE checked the burn to be sure there was no need for concern. HIS final action before returning the sub to the floor at HIS feet was to almost casually rub across each of the nipple clamps to remind the boy they were there before both at once HE opened them up and pulled them away dropping the weighted toys to the floor as HE pressed and twisted the very tender swollen bits of flesh to restore blood flow.
Too much for the body to contain its knees buckled, as HE knew they would, and HE held the sub, HIS property, HIS trainee up and slowly lowered it to its place at HIS feet. Then HE sat down again in HIS favourite leather chair, listened to the creak and squeak of leather from HIS well formed legs rubbed against the chair and felt the cool leather of the back quickly warm to the heat from HIS back and HE reached to finish the scotch and remember the training session feeling very pleased with HIS work. How it all started:

HE sent the message to the sub in its room and then watched the results from HIS phone. HE trusted the sub but still had a camera in every room so HE could watch it whenever HE wanted and make it perform at surprise times. And watching HIS property get ready was very entertaining.
It was a normal day for the sub until it got the simple message from its OWNER “Training night tonight 20:00. I want those titties big and ready.” The sub smiled to itself and started to get ready. First it put on the nipple suckers to start to grow the nipples as much as it could before HE saw them. As soon as they went on its dicklette started to drip from its cage. The sub was careful to grab each drop before it