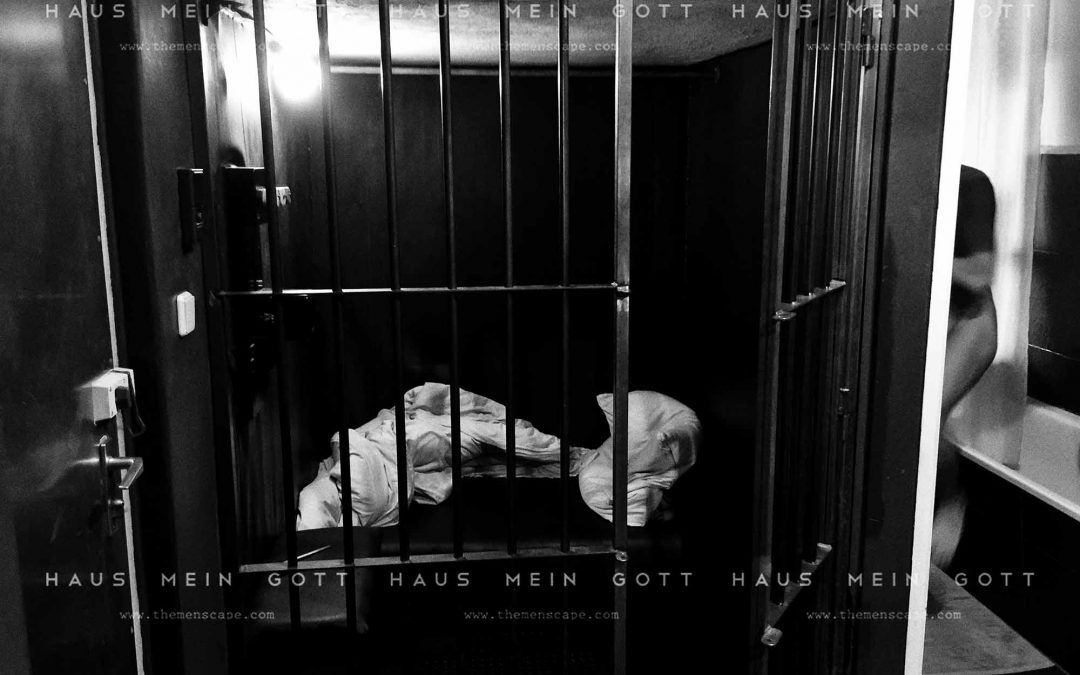 FinDom is a short name for Financial Domination.

In Financial Domination, the Dominant part of the dynamic takes financially control of the submissive; this can be fetishized in different ways, from a dynamic where the Dominant (with a pre existing agreement) surprises the submissive by withdrawing funds from his account with no notice, to dynamics where the submissive makes lots of gifts and presents to the Dominant, to even safer scenarios where the Master takes the financial decisions that the submissive intends to proceed with, lifting the sub from the uncomfortable feeling of being in charge of something, or having authority.

As every high-risk activity between consenting adults, Financial Domination can be healthy and very powerful when supported by two main pillars: a Relationship based on extreme trust, and the Integrity of the parties involved. As said, if as part of a grounded relationship between a Master and a sub, FinDom as any other practice is ok; everyone should be free to live their fetish the way they want. We don’t like it, as it’s too easy to slip and fall, as money is a powerful monster also against the strongest of Masters.

What’s the difference between Financial Domination and Sex Work?

While Sex Work is the practice between two consenting adults on a financial transaction aimed to buy a service of adult entertainment, Financial Domination is one of those DS practices that should only be done by those individual that find it enriching and sustainable, within a relationship based on deep trust and care of the submissive. To create a Relationship of this kind, you need to work on it for months and years; this isn’t something achievable by anybody on an online chat or social media in 5 minutes. Even a donkey would understand this; that’s why we are puzzled when FinDoms get upset at our concern; we think they should be the first to defend their practice by shaming those who are abusing it.

Combine this notion of needed trust and commitment between the two parties, and put it next to the profile headers of these self-proclaimed “masters”, and you’ll get the full picture. There is no interest in the person they interact with, it’s not something special and crafted in a relationship. As a sub, you don’t even exist as person; their amazon wishlist is there, with their paypal or Venmo link. This is all that FinDom is about nowadays, online. A cheap substitute for sex work, appropriating on the powerful aspects of Domination and submission, where money is payed, no service is provided, and people are treated with little to no respect. 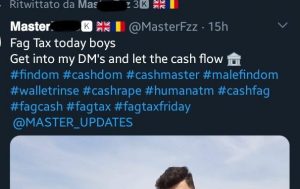 This brings us to the crucial part of the matter, which is how the general gay pop scene has absorbed all sorts of complex subcultures, uniforming them to something absolutely sterile and at service of individualism only, with no bases of mutual respect, love and care nor commitment.

Normally, if you try to take this public position to defend submissives from the emotional trap that these kids and gents provide, you’ll get assaulted, with no surprise, by these “cashmasters”, who will come and tell you you have no right to discredit their fetish. They’ll tell you you know nothing of Financial Domination, and that it is a very ethical thing when a good Master is doing it.

While of course we agree that any practice that a Master does with his sub is his own business and that for sure everything can always be kept safe, this is a simple move to generalize the matter and pretending not to understand the point here. What we are discrediting and standing against is not the controlled and mature activity between two cosenting adults in a dedicated relationship.

If it was sex work, and it was declared as a service and nobody was mistreated weaponizing their identity and sexuality, we would have nothing to say about this. But when the terms “Master and slave” are involved, and submissives are told “you are born to serve and the only way you can be of any use in this life is through financial worship”, then no. This is abuse of a deep need of a submissive to be of only use of a Dominant, without caring at all for the sub. This is what happens in 90% of the cases, especially online, and is NOT Ethical.

Ethical FinDom exists in the boundaries of consent between people who have a tailored relationship; but even then, where is it really the buffer between consent and brainwash? We will leave this up to you in the comments field. If you want to do FinDom, and you know you have the Ethics and moral compass to do it safely, do it. With your sub. Not by putting your amazon wishlist on twitter and dirtying the name of “Masters” with your lack of structure and dedication. 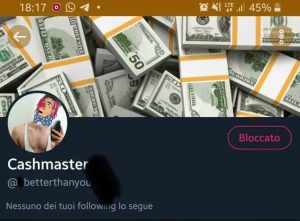 The modern fashion of “cash masters” 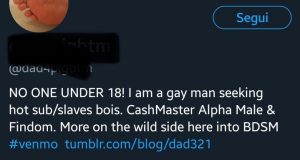 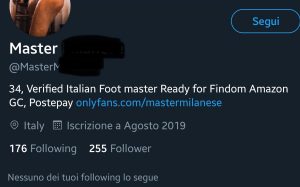 None of these people using social media as a cheap way to grow money without giving anything back to those who pay them but reinforcing their trauma, and their embedded idea that there is nothing special about them, and that they can be considered only when sacrificing their money.

Why do we publicly stand against FinDom? The despicable lie of online FinDom

The damage done to the subs:

Not all submissives are fragile people, but all people have their own fragilities inside of them; being a submissive in a world that is letting go more and more on true, intense sensations of belonging, growth and cultivation of a relationship, is quite hard. You have the feeling that you’ll never find the Master you want to love and serve forever, as nobody seems to be serious and committed about it. The risk of getting hurt is huge. Also, modern gay community is so toxicity obsessed by fashions, looks and trends, that in order to be considered as a sub you get the feeling that you have to be young, ripped, hung (???), and god knows how many other checkboxes. A deep solitude grows inside of committed subs looking for a real Master.

If you are gifted Empathy, you should understand that when you’re presented with a web environment which keeps shouting at you “pay me, worthless pig”, “serve superiors, let them drain your wallet”, “if you can’t pay me, you’re useless and of no service”, this has an important impact on your emotions. How would you feel if you message Sirs and they never respond to you or even acknowledge you, unless you offer them some money? A reinforcement of the trauma of feeling that as a submissive, your life is pointless or incomplete, as you can’t be of service to anyone. This is the kind of brainwashing that this FinDom is doing on many subs who are vulnerable to this kind of message.

The damage done to the doms: 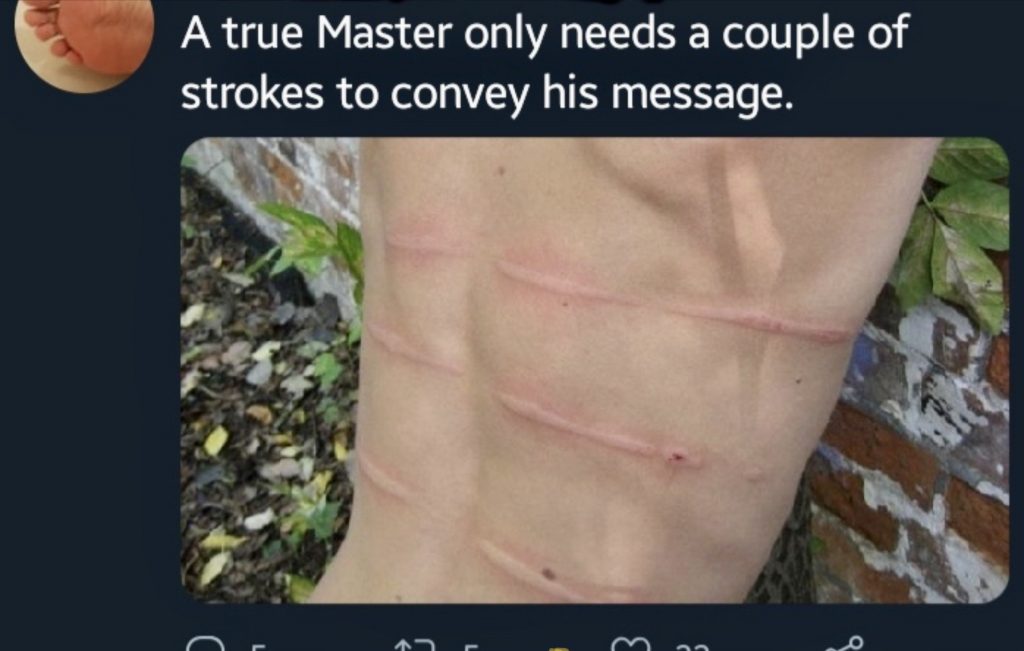 Being a Master is much more than being a Dominant, and is also much more than just being a SIR. And it’s not more in the sense of “better”, it’s more in the sense of COMMITMENT and RESPOSIBILITY, nor to mention INTEGRITY. That’s why as a Master I would never take money from FinDom, even if I need it badly. That’s because I have chosen this duty, and my mission is to inspire integrity and strictness in men, both through my training and my words/actions. I prefer to get paid for a service that I’m offering, as an adult movies producer or as a Rent Master, where nobody is treated with less respect, and it’s clear that my client is buying himself an experience, where there is no manipulation of his identity as person.

Financial Domination is one of the activities or fetishes involved in long lasting relationships between a Dominant and a submissive, when it’s done with ethics and in consensual and respectful way.

For what we see everyday online, today the FinDom scene, like every serious and also dangerous practice requiring caution, respect and integrity, is mostly a deceiving and abusive environment filled with improvised impostors, pretending to be someone they’re not, getting off on managing to convince submissives to pay them out, putting leverage on the true submissive need to please another person.

What do you think about the situation with FinDom? Have you ever felt mistreated, abused and depressed as a consequence of being exposed to all of this? Let us know in the comments. 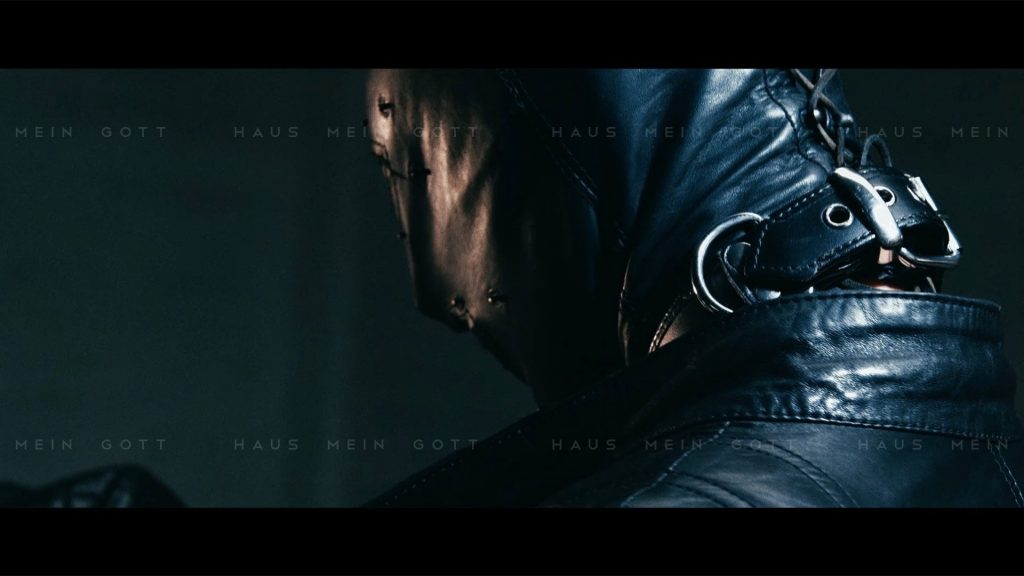 The point of view of a Old Guard Leatherman towards Recon’s Podcast about Old Guard vs New Guard. Being a Leatherman is not a fashion statement, here’s why

WOULD YOU LIKE TO
STAY WITH US?
We typically send out a Newsletter a month, only when new content is out. No Spam, no bullshit.
Trustpilot